Our game “Something Ate My Alien” has a pretty unique mix of several genres combined. It is foremost a platforming style game where you dig your way through the levels in a search for a wide variety of minerals, gems, gases, fossils and artefacts to satisfy the ransom demand and to be able to upgrade the equipment for the Alien you control. 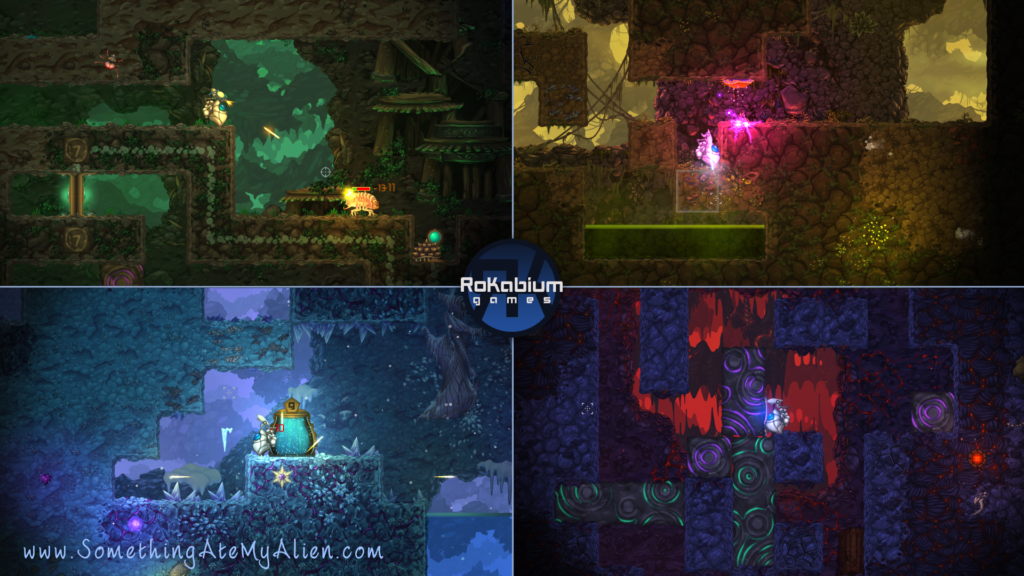 Then we have the puzzle rooms, which are small chambers with locked doors that you need to open to access the inside. Inside these rooms time stands still in effect; Enemies don’t spawn here, oxygen does not deplete and injury from falling too far does not exist. It’s all about taking your time without any stress to think through and try to solve the puzzle at hand.

The last one of the major genres of SAMA is the combat with enemies, but this part is greatly simplified by them being pesky things that tries to trip you up while you explore each world. If you upgrade to better weapons along the way, you should be able to take them out quite easily.

For this blog post, let’s focus on the puzzles in SAMA.

The structure of the puzzles is based on differently coloured blocks that need to be placed into slots with their corresponding colours matching. The basic idea is simple and is like that used in the classic “Sokoban” puzzle games.

The blocks can be pushed or pulled. There is a mix of diggable blocks, undiggable blocks and empty areas in each puzzle room, leaving the player to figure out which blocks needs to be dug out or left as is to be able to slide the coloured stone blocks to where they need to be. 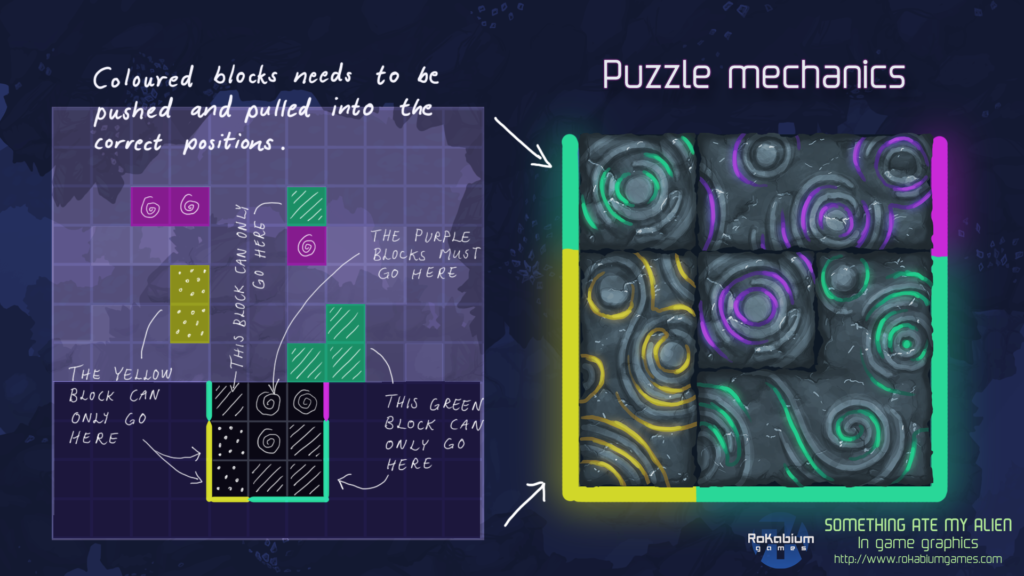 In the beginning the puzzle set-up is kept simple and with few steps needed to complete it. As the game moves forward the complexity of the puzzles are stepped up, so each puzzle room will require different tactics to fulfill.

If a player gets stuck in a puzzle, or moves a block incorrectly and wants to redo it, we’ve implemented a “Reset” action ( R on keyboard ) which allows the player to try again.

We wanted all the puzzles to feel a bit unique and fun and at the same time get more and more complex as the game went along to challenge the player. The design was based on:

So let’s take a look how this works for each planet and the resulting puzzle designs. 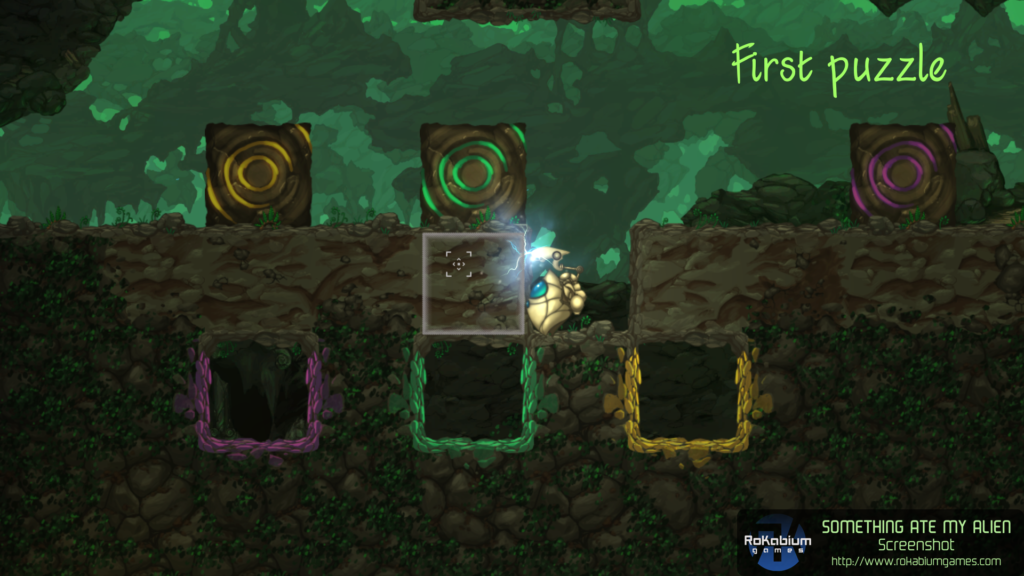 Metis is the first planet and it has the simplest puzzle design. All puzzles here are based on single, coloured blocks that need to be pushed into specific openings with corresponding colours matching.

At one point you start getting uncoloured blocks obscuring or blocking the path of the coloured blocks you need to get to, and the player now has to try to move these blocks out of the way so that the puzzle blocks can get into place. 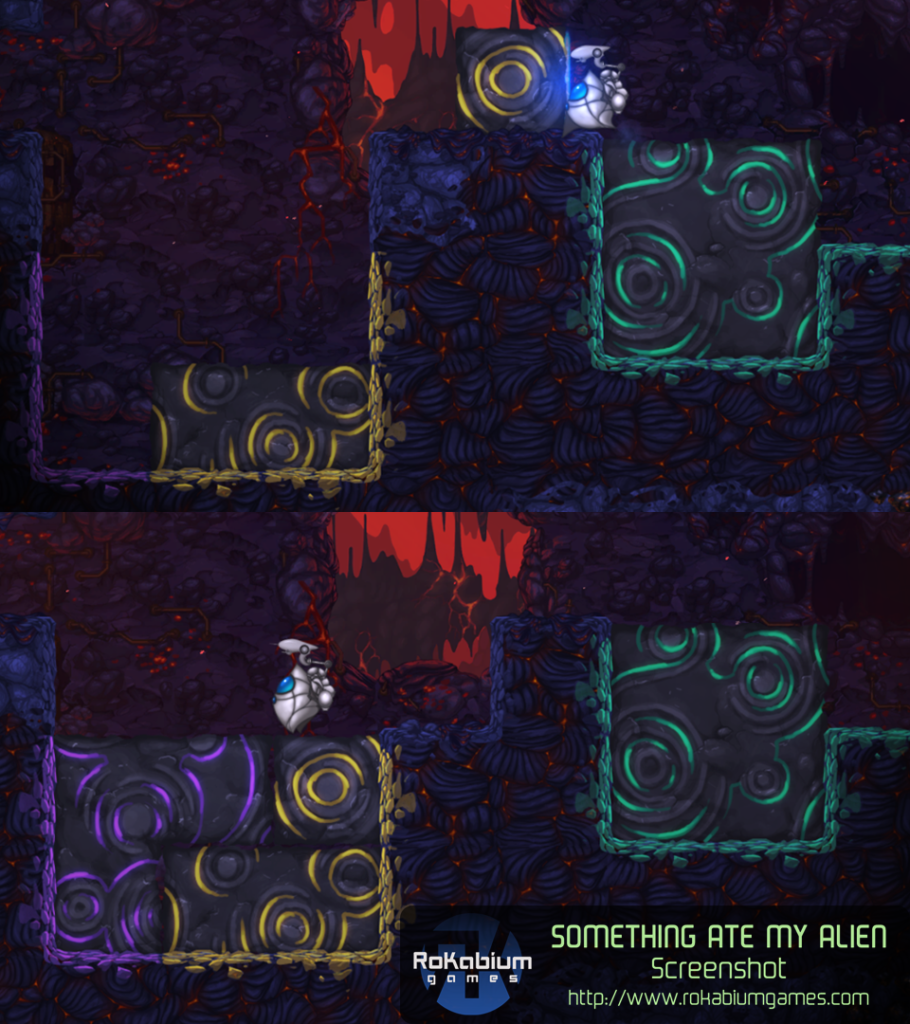 Moving onto the next planet Tartarus the puzzles have now shifted to blocks that can be more than 1×1 in size, and they need to fit into slots with several colours needing to match together. Here the puzzles need to be considered in 2 ways before trying to move any block into place. First the player needs to figure out how the blocks in each room would fit together with the other blocks in there to make the final shape needed to fit into the allocated spots. Then the player needs to figure out in what order to move the blocks to get them all in place. 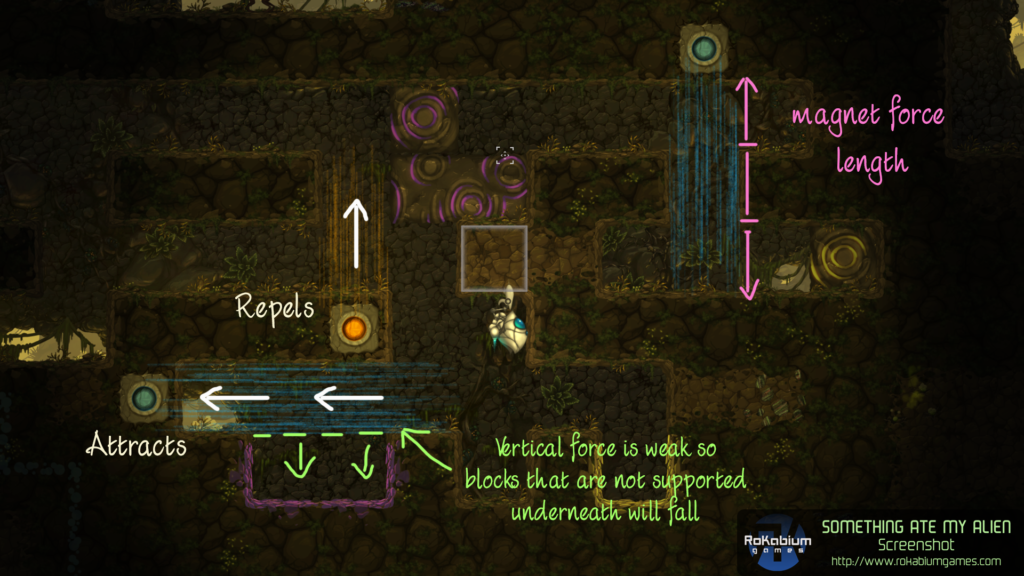 Lelantos is the third world and here magnets are introduced to the puzzle mechanics. The two types of magnets introduced will either attract or repel the coloured blocks, but they have no effect on the uncoloured ones.

Each magnet will show beams that stretches out the same number of blocks that it’s force affects and in the direction/s that force will interact with the coloured block that crosses it’s path. Magnet forces that goes out horizontally are weaker than the force going vertically, meaning that a block that is being pulled or pushed by the magnets along a flat plane will fall downwards if there is a gap in that plane.

The complexity of the puzzle design across this level starts with simple magnet placements and single blocks placements to more difficult ones where you need to try to get around the magnets or use them to move the coloured blocks around and fit several blocks together to create complex shapes. 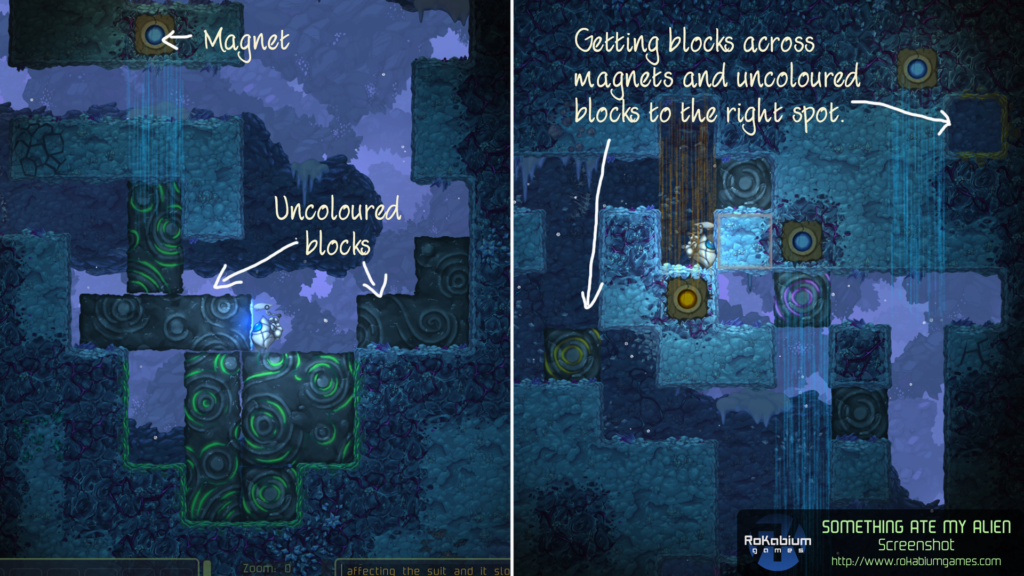 In the last world Aura the puzzles all come together in a mixed form where the player now needs to use all the skills learnt up to this point to solve these. All things are implemented here in different combinations, single blocks, different shaped blocks, uncoloured blocks and magnets.

Here the difficulty increases by having more and more complex solutions for each puzzle where multiple uncoloured blocks is in the way for getting the coloured ones into their slots. Several magnets are placed to interfere or help with the path of the coloured blocks and blocks themselves being in weird positions needing to get around other blocks in a correct order.

Most people finding the puzzles tricky but fun and it seems the majority can solve them all even if it takes some time once they get more complex. We seem to have hit on point when it comes to a design that is giving people just the right amount of challenge without being exceedingly hard or too easy. 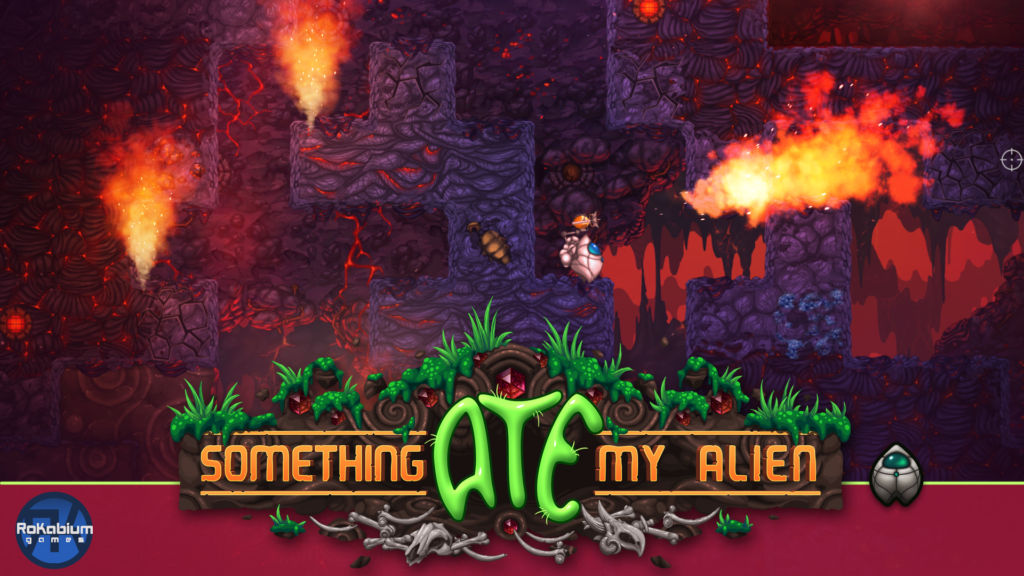 If you are a person who enjoys puzzles, then definitely give SAMA a try. If you happen to be one of those players who just want a very chilled puzzle game, then chose “easy” mode where the enemies are few and easy to kill and the focus lies more on the exploring and finding loot and solving the puzzles.